LEDBot is a scheduler and application server. You can use it to stream images, messages, emoji and more to LED message displays in your home, office, school or hacker space.

At the moment LEDbot can accept input from Recurse Center's internal chat system, Zulip, a web front-end and API, Slack, IRC and fetch arbitrary JSON feeds. It shouldn't be difficult to add other types of input. Take a look at the code and write another listener! 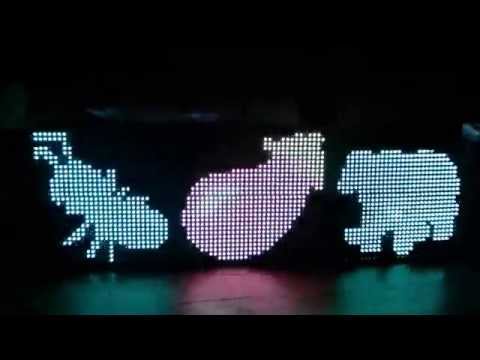 A simple browser-based front-end is available at http://host:4000/. Text and images can be sent via POST requests to API end points.

Message or mention LEDbot with the following

LEDBot now has basic support for Slack. Register your bot and then send a message @ledbot.

LEDBot can connect to a MQTT broker and subscribe to channels for "push" notifications. This functionality is very minimal at the moment and can be expanded upon with additional parameters. By default LEDBot listens to channel ledbot/ on the public broker test.mosquitto.org

LEDBot can periodically pull data from arbitrary feeds (ex: weather, quotes, news articles) and add them to the queue. This functionality is still rough and in development see webFillerHandler.py

The documentation for the project is on Read the docs

This project aims to be AWESOME to contribute to, especially for new Recursers. To begin contributing, look at the long list of issues we have!